You only become real when the three nadis, ida, pingala, and sushumna, pierce the Heart. 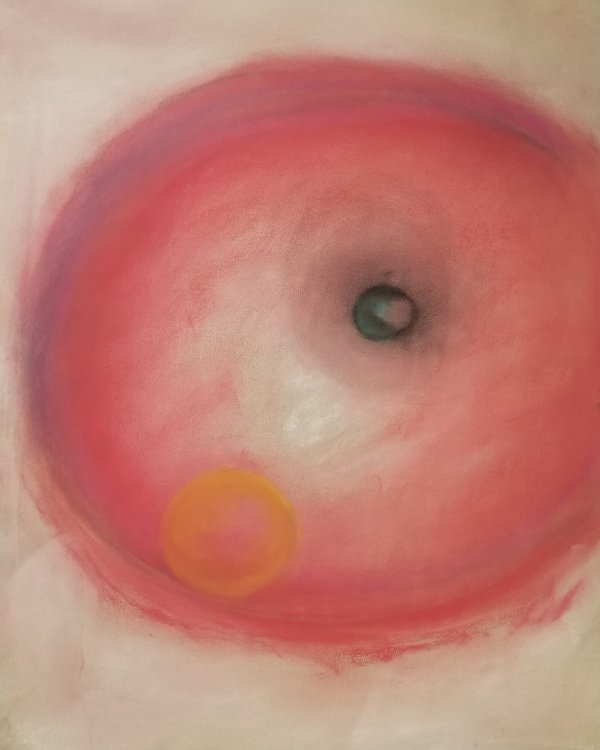 When you are inseparable from God, there is no longer anything to be received from God.

While the Mind rests, the Soul radiates.

For happiness…
BE BEYOND ALL IDENTITIES.

When you stop identifying yourself, you can BE yourself.

Knowing is your roots.
Beliefs are the leaves. They will fall and grow again.

You are seeking God to know yourself.
There is no other reason.

Currently, I am creating art using my left hand only. Not sure why this is but I go with it- the artist within having a mind (heart, hand, etc. 🙂 ) of its own. Of course, this has resulted in several images that only a mother could love.

The internal artist, though, perhaps knows the story before it has been told.

On this day, I even turned to a “Creativity” meditation in my kundalini book.

I had been thinking of left-right brain while I was creating my art and then came across something in a book that helped me understand my work.

The book is “A Gift to Myself” by Charles Whitfield (HIGHLY recommend for inner healing). He discusses a process about feelings:

I guess this stuck with me because during times of intense feeling, we can short-circuit this back and forth in the brain.

Perhaps the drive to do art with my left hand is simply a way to form some new connections and stories.

Gates of awakening
taking vertebral form-
one by one we pass-
never understanding the next door-
until we are long past.

—–
This is a funny little drawing.
I saw it, at first, as a series of vertebrae and ribs, and I pictured walking under these to get to the red “sun” at the front- the seat of enligthenment.

We may think we can anticipate the next gate or door (I have been guilty of this 🙂 ) but the motto of awakening is this-
Awakening is the process of getting the blind to see.

Thus, the gates we pass through are often a surprise to us, as they should be. We can not see what we are blinded to, and it is upon the gate’s threshold that we make the choice- to see or remain hidden to the view we need the most- the one that is our own.

For some reason, I think so many are currently passing through some significant gates at this time. Don’t hesitate upon the threshold:) 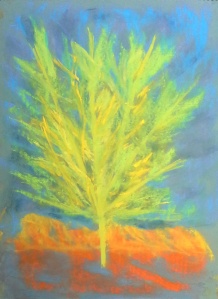 I love trees and one message they always seem to convey is how to be strong in one’s self while being fully contained.
We don’t always need to run around with an output of energy in order to see ourselves as strong and valuable.
The tree stands with unending strength and no one ever doubts its power.

Who let the snake out?

Snakes represent awakening and kundalini energy. They can also indicate our lowest natures.

In this picture, we see a stoic rabbit sitting and watching a display of power that we are not sure how it will end.

An egg is sitting in a chair, nice and comfy. However, the egg still does not feel secure. Attached to its head is an umbrella/parachute in case it were to fall. Will this really prevent the egg from cracking? Probably not, but the egg likes to believe in fantasy.

The egg can represent our fragile sense of self. We want to “crack our shells” and grow and change, but we are just not sure we want to fully commit to it. We want a parachute to catch us if we fall.

Life, though, has other plans.

Even if we are symoblically ensconced in a comfortable chair, our awakening (the snake) will find a way to emerge.

Our awakening may crawl out from under the chair, much to the surprise of everyone.

And once the snake emerges, once you begin changing your life, there is no putting the snake back in its place.

The rabbit in the image represents overcoming our fear of change. According to Jamie Sams in Medicine Cards, the rabbit symbolically represents fear.

But to exist in the face of fear is one of our greatest powers, isn’t it? The rabbit shows you can be afraid, you can be fear, and still you will survive.

In the image, the rabbit should be fleeing the snake. Instead, the rabbit holds its ground (something rabbits will do- they will completely freeze when threatened). Without movement, they are hoping to remain undetected.

So, let the snake of awakening emerge in your life. Be the rabbit-seeing it all and remaining still, observing the changes.

You may feel fear, but don’t allow it to push you to flee. Stand your ground, be immovable for a bit, and allow the snake of awakening to move along its way.
—
Okay, this was a funny picture to emerge and develop. Who knows what it all means? This is just one interpretation that came to me. Obviously, the picture in some ways got away from me. I don’t think anyone would sketch this out with intent 🙂